How do people facing life-altering health care decisions make the right choices for their treatment? People turn to family, friends, and the web to obtain advice outside of the doctor's office. However, information available through these channels often creates more questions than answers.

In 2007, Shub Debgupta and his wife faced a nightmare scenario during the pregancy of their first child. They were told their child could be born with significant learning difficulties. Shub and his wife asked themselves questions they could not find answers to, including:

Shub and his wife were fortunate. Their child was born healthy, without the complications they feared. Yet this agnonizing experience stuck with Shub. In early 2008, he founded WiserTogether to improve health care decision making for patients.

The process and data combine as the platform WiserHealth. WiserHealth is a suite of products for patients with varying situations, including pregnancy, arthritis, heart problems, depression, diabetes, and respiratory diseases. The products are sold to organizations that offer one or more of WiserHealth's services to its employees.

WiserTogether's main office is in Georgetown, Washington, DC, just off the classic M Street drag. Some employees also work remotely across the United States in California and Georgia. 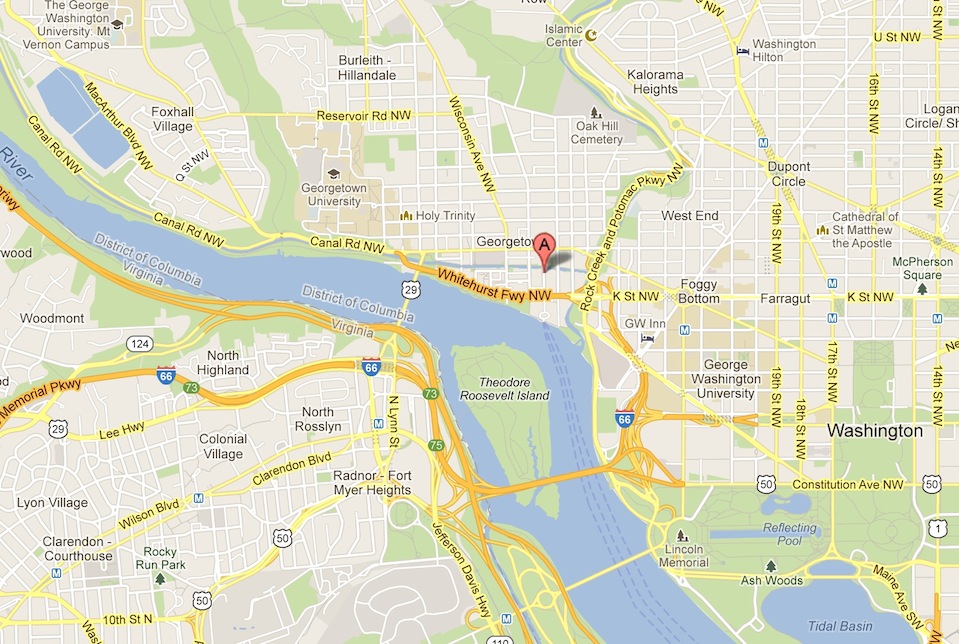 I met with several members of WiserTogether's development team, including their Chief Technology Officer Erik LaBianca. WiserTogether uses a range of current technologies including Python, Django, and a combination of client-side HyperText Markup Language (HTML), JavaScript, and Cascading Style Sheets (CSS) to deliver the WiserHealth platform. 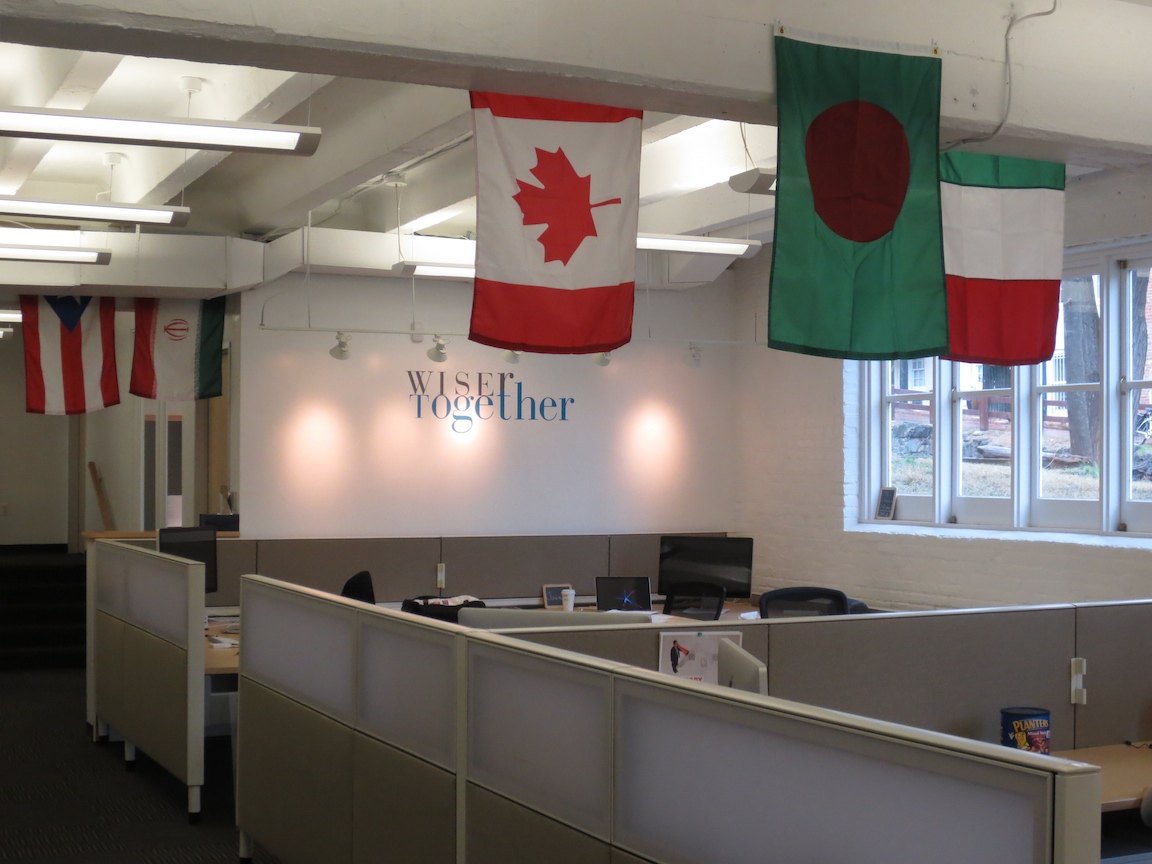 The team currently releases software updates two to three times a week and is moving towards daily updates. Eventually they hope to have a continuous delivery model in place for continuous updates certified with an extensive automated testing suite before being released to the public. 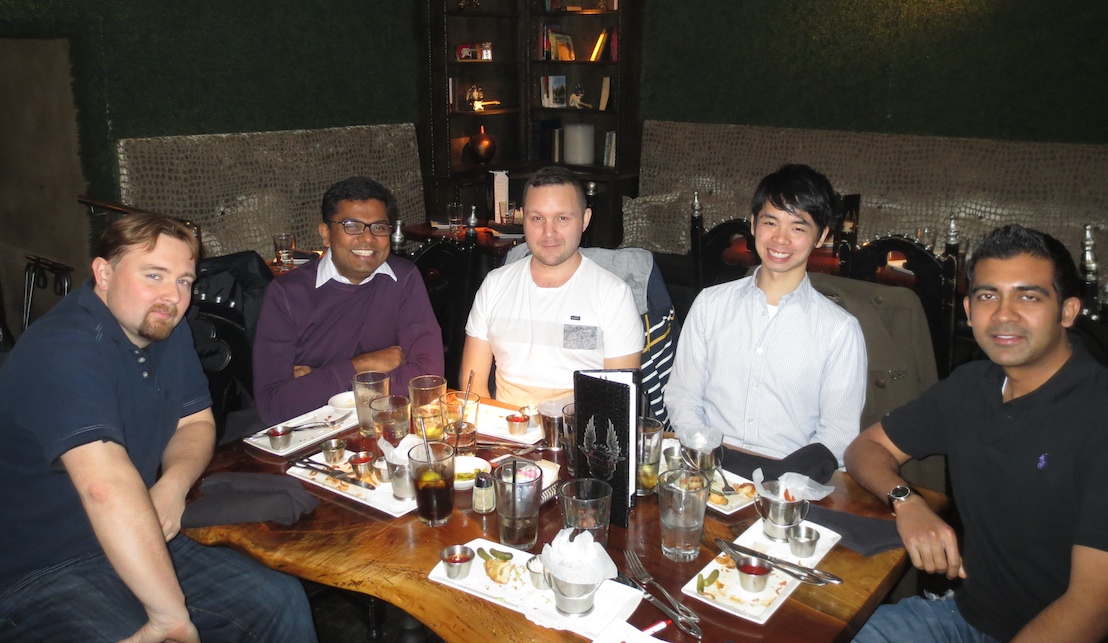 Lunch at Thunderburger with several members of WiserTogether's development team. From left to right, Erik, Kamalesh, Johnny, Jimmy, and Tareque.

One of the topics we discussed was how software development is impacted by being located in Washington, DC. Several development team members commented that the technology meetup scene far surpasses some other cities they've worked in. Washington, DC has well established groups such as DC Python and Django District that attract fifty-plus developers to monthly meetups.

However, a major disadvantage to working in software development in the District is the shadow of the Federal government. Government agencies and the military throw large sums of money around to "solve" problems. Investments are not ramped up gradually based on project success but are dumped all at once within a single fiscal year. This approach is a complete mismatch with how to develop quality software. Instead, a small software project using limited resources should prove that a real problem is being solved. Only then, if the solution proves successful based on user feedback, should funding gradually increase to build expanded features.

Two additional major issues arise from the amount of money that is invested in large software projects for federal agencies. First, these projects drain the local talent pool and increase developer salaries for competing non-government technology companies. Second, the excessive money leads to complicated, overengineered systems with vast arrays of features that are wasted.

What Can Government Do To Help?

How can federal and state governments help companies like WiserTogether so they can improve the health care quality in the United States? Our discussion coalesced around three aspects where government must improve:

Clarifying HIPAA was a central theme during our discussion. The laws are so convoluted that no one except lawyers can interpret the regulations. Audits by the Department of Health and Human Services (DHHS) are a nightmare. Fortunately, WiserTogether has not been been audited directly by DHHS, but other organizations they work with have been. Auditors are looking for a reason to "prove" their own worth by finding fault with something. This is a broken system that both prevents innovative companies from complying with the law (because no one can interpret it properly) and creates a powerful disincentive to not start a company that has to comply with these regulations.

Another issue is the need to clarify which platforms are HIPAA-compliant for audit purposes. For example, the Heroku platform-as-a-service could provide a great foundation for health care applications. Unfortunately, no one knows whether Heroku would pass an audit by Department of Health and Human Services. Heroku is not a niche service - it is owned by Salesforce and runs millions of applications for thousands of companies around the world.

Erik and his team also recommended that the National Institute of Health should create an open ontology open application programming interface (API). Companies in the healthcare industry could use the API to organize data in their applications.

I am certainly no expert in the health care industry and I could be wrong about the above points. If I am, please email me at matthew.makai@gmail.com so I can correct my misinterpretations.

On March 9, I will head out to Charlottesville, Virginia and begin my tour of 30 cities across the United States. I may meet with and write about one or two more companies in DC before heading out if I can fit it into next week's schedule.

If you enjoyed WiserTogether's story, you may also enjoy reading about HumanGeo's approach to product development for geospatial mapping software in the cleared intelligence space.