Outsourcing was once the biggest trend in the information technology world. The World is Flat by Tom Friedman explained that while the United States was focused on fighting terrorism after 9/11, the rest of the developing world was passing us by. Global information access through the Web meant that soon you would be better off born a poor but brilliant child in India than a B-student in Minnesota.

Information technology outsourcing was one facet of a larger trend that technology would break down geographic barriers. Students in the United States, myself included, who were interested in software development were advised against studying computer science since "those jobs will all be shifted to India soon anyway."

Globalization is real but outsourcing all software development was undone for several reasons.

First, the business landscape shifts so quickly that by the time an organization writes an extensive requirements document and throws it over the wall to developers in India, the software being built no longer matches the current needs of the business.

Second, small teams of 2-5 developers and designers can now achieve orders of magnitude greater output than decades past. The productivity differential comes from code reuse through leveraging open source and a reduction in waste from iteratively programming working software through agile software development.

Finally, time zone differences still matter. Working in a time zone ten to twelve hours removed from the rest of your team causes friction. Friction slows down the software development and allows competitors to pass you by.

AgilityFeat began as an agile consulting firm with Arin Sime (@ArinSime) as the sole founder. Arin worked with software development teams to either transition to an agile model or optimize their team's existing agile workflow.

Over a period of about six months, Arin thought through what it would take to incorporate overseas development into the services he offered his clients. But he knew that outsourcing to far away overseas countries was unlikely to provide enough value to his clients to make it worthwhile. 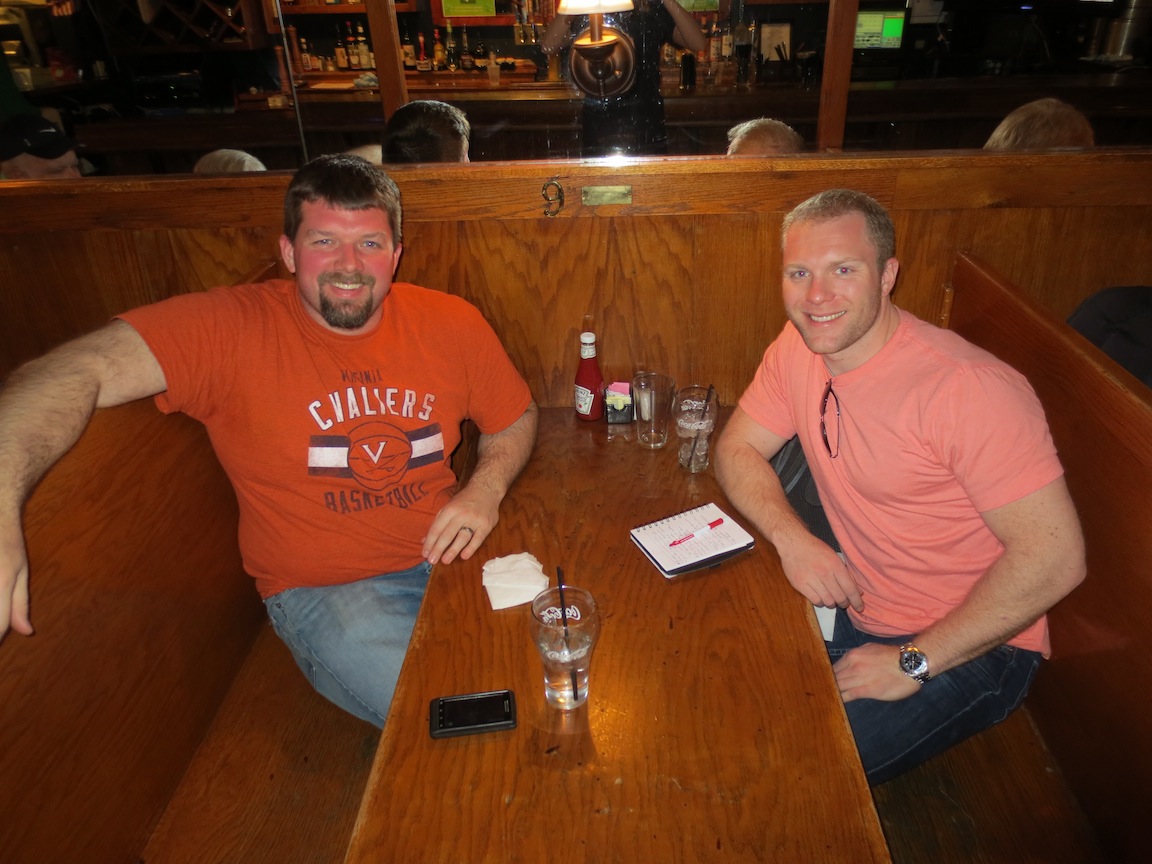 Arin, AgilityFeat's founder, and myself at The Virginian in Charlottesville.

There is a variation of outsourcing, known as nearshoring that mitigates risk due to major time zone discrepencies. The software development team is located in the same time zone as the business' location. Cost is reduced by taking advantage of the lower cost of living in a different latitude.

For example, Washington, DC's cost of living is much higher than in Richmond, Virginia. Business owners in Capital One's headquarters in McLean, VA just outside DC works with developers located in Richmond to build their finacial systems.

Similarly, many of Excella Consulting's clients work with a consulting team partially staffed by staff and students at the Virginia Tech extension center in Blacksburg, Virginia. The mix of on-site consultants combined with off-site developers creates a lower blended hourly rate than purely on-site staff with the same results.

How does nearshoring relate to AgilityFeat? Arin knew his business' scalability was limited when it was just him doing agile consulting. Over time Arin built relationships with partners in Costa Rica. Costa Rica's low cost of living, relatively low crime compared with other Latin American countries, and its proximity to the US (a three hour plane ride from Miami) made the country appealing for nearshoring.

The combination of agile software development, nearshoring, and lean startup methodologies works well for bringing software to market quickly and validate hypotheses for how customers actually use a product.

If you want to learn more about software development in Charlottesville, check out my post on WillowTree Apps, who do mobile app development from their office on the Downtown Mall.