Why Does Building Software for the Government Cost So Much?

The latest US government software project under the news media spotlight is the healthcare.gov website. The "at least $350 million" project has let few visitors complete the ... (read more)

Debate on the "Autoworkers" of Our Generation

An Offer to Developers Visiting D.C.

This is a short post. I'm settling back into downtown Washington, D.C. now that I have been back for about a week and a half.

I am extending an open invitation to software developers visiting D.C. who want help getting connected to the tech scene here. If you are coming to town for a conference or vacation and are interested in checking out the software development community, please ... (read more)

After five months and thirty cities, I've returned to our nation's capital. My time on the road was a tremendous opportunity to spend significant time outside the D.C. bubble and learn from amazing people that I otherwise would not have had an opportunity to interact with.

I want to use this post to highlight and thank all the organizations I met with around the country. In addition, ... (read more)

After traveling to 30 cities over the past 5 months as part of my Coding Across America project, I've discovered that entrepreneurs can categorize cities into one of four types of software development scenes.

Software developers with a full stack skill set are necessary as a "raw input" to an entrepreneurial culture. Over ... (read more)

Hacker Houses Are An Underused Concept

I have often been asked during my Coding Across America project if I know software developers willing to relocate to the areas I visit.

I've been on the road for two months today. Here are a few of my thoughts to date.

At the one month mark I wrote my thoughts on meeting startups. I still agree with what I wrote in that post. This post is a little different - more ad hoc topics in each section. Some of these topics I've been thinking about for ... (read more) 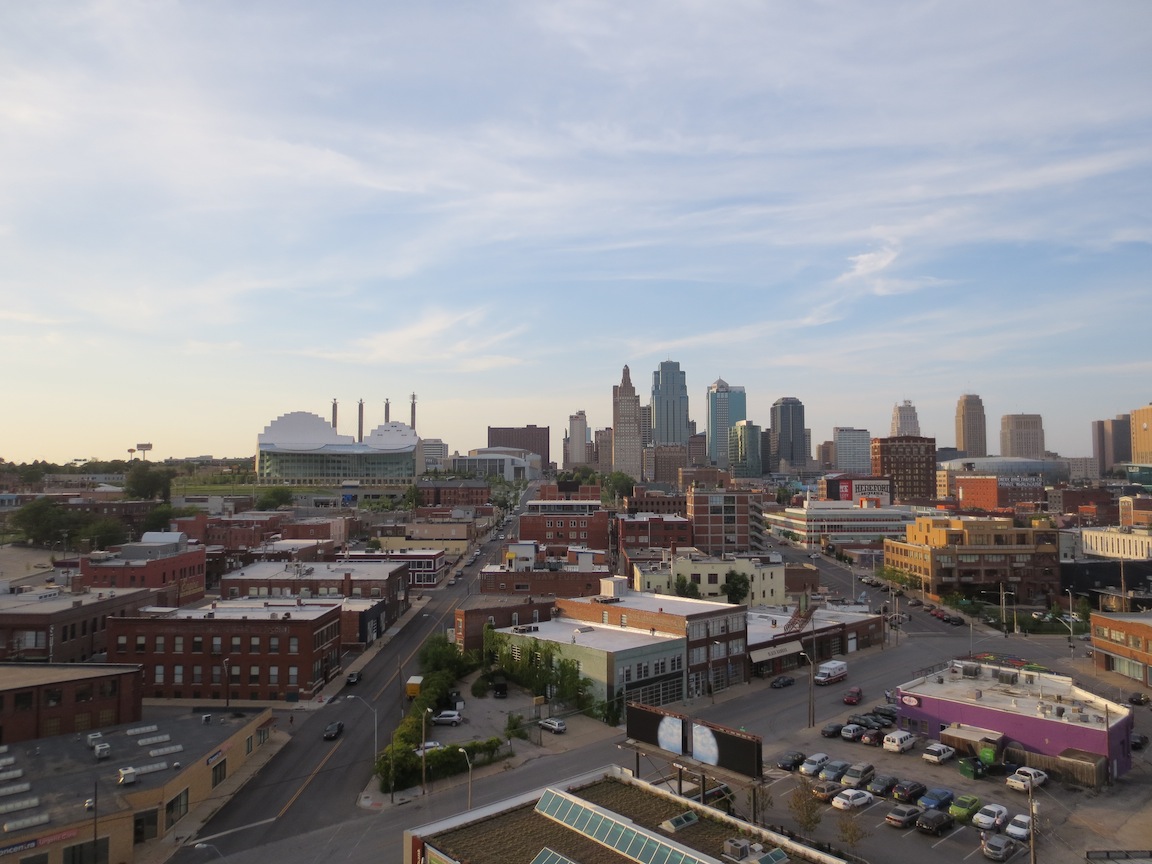 A picture of downtown Kansas City I took while in town last summer.

Why the Hell Are You In [small city]?

I've spent the past few days in Los Alamos, New Mexico (population 12k) and before that Lubbock, Texas (pop. 234k, 83rd in the country for cities). I'm spending the weekend in Moab, Utah (pop. 5k) before driving to sunny Phoenix, Arizona.

Suprisingly, the most common reaction with regards to smaller cities is "why the hell are you going there"? I found that ... (read more)

A Month of Meeting Startups

I have been on the road for one month meeting with startups, software developers, and organizations dedicated to creating a greater entrepreneurial ecosystem in the United States.

Twenty percent of my time and cities are behind me. I have driven just over 2600 miles of my projected 10k+ miles according to my aggregated daily mileage totals. This post contains my initial thoughts and ... (read more)

I've been catching up on reading my book backlog while traveling over these five months on the road from March through August. During my time in Dallas I purchased Starting and Sustaining by Garrett Dimon. At $99 for the book plus spreadsheet it is quite a bit more expensive than the other books I have picked up ... (read more)

I just spent the past week in New Orleans (NOLA) at IdeaVillage's New Orleans Entrepreneurship Week (NOEW). This is only my third city of thirty over the next five months so I can't yet draw any big picture conclusions. However, it feels like something special going on down ... (read more)

You've received an email from me asking if we can meet at your office or go out for lunch so that I can tell your story about solving interesting problems with software. This post attempts to answer some of the initial questions that may immediately come up on your side.

After reading through this post I am sure you will have further questions. When you reach that point please email ... (read more)

Wikivoyage and a Bonus City

I just found out about Wikivoyage today. I can't believe I did not know about it earlier. Wikivoyage is Wikipedia for destinations. I will use Wikivoyage extensively for this trip as it complements my cities pages.

With exactly two months until I hit the road my focus has now shifted to finishing my research on the cities I'll be visiting and communicating with tech groups and companies and I'll be meeting on the road.

I'm in the process of booking the hotels for the first ten cities I'll be in - that should take me through sometime in ... (read more)

"Some convictions are so strong that the world must break to accommodate them."

The final city additions include Detroit, Buffalo (NY), and Boston while I cut Pittsburgh and Indianapolis since they took me too far south to visit Boston.

I am currently finishing up my research on each city and planning individual days when I ... (read more)

I found this post on the diminishing marginal utility of stuff climbing Hacker News yesterday morning and it resonated with me both in general and for my trip.

Staying In Shape On The Road

I work out almost every day and access to my gym in Arlington is convenient (a walk across the street). So figuring out how to stay in shape on the road has been a particular challenge. I don't think I'll have it completely figured out by the time I leave. It'll probably be something that evolves as I travel from one city to another.

Here are some of my thoughts outlining the ... (read more)

Living Out of Your Car

I am not planning to live out of my car while on my five month road trip like this guy did while bootstrapping his start up. But his determination to spend as little money as possible to start his company is impressive in a weird way. His Quora write up includes a bunch of ... (read more)

There are several archetypal days I'll have over the course of four months on the road. Some types of days are more conducive than others for coding.

I need large blocks of time since it's difficult to context switch while deep diving into difficult problems while programming. Focused time just won't happen if I only have an hour here, 15 minutes there, to work. See Paul Graham's ... (read more)

One of my least favorite quotes is "everything happens for a reason." The connotation is clearer if you append "but I didn't plan it out that way" onto it.

Events happen (or "shit happens" if you prefer that expression). It's easy to ascribe attributes and reasons to those events afterwards. The human mind works this way naturally. Ascribing reasons to ... (read more)

I'm writing this post from Kansas City, Missouri. One of the things I find so striking here is how quiet it is downtown during the day on weekends. Part of the lack of people may be due to the 100+ degree weather, but my friend PJ who lives here says this is normal.

Compare the quiet here in Kansas City to the constant crowds that are out at all times of the day in Washington, DC or ... (read more)

One of the things I constantly struggle with in my software development consulting career is balancing breadth versus depth.

When I graduated from JMU in 2005, I was not deep in anything related to my career. I had a very broad knowledge of computer science, Java programming, and a few pointers for where I should look next ... (read more)

Thoughts On Some Destinations

I originally began writing posts for every city I planned to visit but halfway through I felt like I got out of the exercise what I wanted. These are the condensed and cleaned up versions of the original posts by city. Some of the posts are quick summaries of why I wanted to visit there while others get more into what I know and want to find out about the software development scenes ... (read more)

I knew I needed a better camera than the one in my Droid 3 for this trip. At first I thought about digital SLRs, but the additional size, weight, and complexity turned me off to them. I am not currently interested enough in learning the intricate details of tuning a camera or changing a lens to take the perfect picture. It is unlikely I would gain any benefit from an SLR over a quality ... (read more)

Since coding is in the title of this site and my trip across the country, what will I be programming? Part of my excitement with the trip is having focused, dedicated blocks of time to sit in coffee shops or restaurants and work on projects I'm passionate about launching. While my development projects often shift every six months to a year, I'm sure I'll be working on some of all of the ... (read more)

By far my favorite part of planning and undertaking this trip is talking to people I've just met about where they've lived and where I should go. When you ask people where they are from and where they've visited the responses are often surprising. Asking detailed questions about where they recommend going if you only have a few days in town not only brings out useful responses, it's also a ... (read more)

Until I plan my exact trip route, book places to stay, and figure out what (if any) tech conferences I'm going to, it will be hard to determine an exact budget for my trip. However, I can create a ballpark figure based on averaging an aggressive budget and a conservative budget. "Conservative" in this case means I try to spend as little money as possible while in the aggressive ... (read more)

I recently remarked to someone I was talking to about my trip that it is odd knowing I will not be in Washington, DC at this same time next year. I've lived in Virginia for the past eleven years (4 @ JMU, 2 in Arlington, 2 1/2 in Charlottesville, 2 1/2 back in Arlington). It's easy to fall into a trap of taking things for granted when you know you always have them at your disposal. For ... (read more)

“Many wealthy people are little more than the janitors of their possessions.” - Frank Lloyd Wright

Several years ago I decided see if I could eventually fit all my possessions in my car. Until recently, this goal seemed like an impossible task. Look at how small that trunk is. The car has no back seat! ... (read more)

The Coding Across America contributors page is a list of everyone that has in some way given me advice, recommendations, or in some way shaped my trip.

The four month journey I am starting in March is much too large to have planned and figured out just by myself. I want to recognize everyone ... (read more)

What To Do In Each City

Here are the main places and events I intend to visit while on the road.

I have been to a bunch of great meet ups in the Washington, DC area. I am sure many of the destinations on the list also have great meet ups. I'll lean heavily towards areas that I work in, such as Python, web development, mobile development, and DevOps. However, if I see ... (read more)

Why travel across the United States for four months? There's a few ways to approach this question, so I'll answer three variations separately then bring it back together at the end.

I have lived in Virginia for the past ten years and New Jersey for the previous eighteen since I was born. I do not consider myself well-traveled even within ... (read more)